“Prison generality, by playing to the full depth of the social body and by constantly mixing the art of rectification with the right to punish, lowers the level at which it becomes natural and acceptable to be punished.” 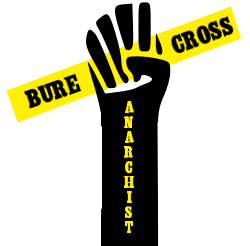 The Anarchist Black Cross (ABC) is a libertarian prisoner support network that emerged in the early 20th century with support for the many anarchist prisoners in Russia. Since then, the ABC has spread, become a network of groups sharing some fundamental principles and has extended to all prisoners.

The ABC advocates for the abolition of all prisons and opposes all coercive and punitive social control mechanisms. This action is expressed above all by solidarity with prisoners, breaking the isolation of the prison by creating a link, through writings or visits, mobilizing through actions, events and texts around individual or collective situations in prisons and producing in-depth reflections, debates and exchanges around the issues of prison and confinements in general.

While the legal consequences of the actions in Bure are looming on the horizon, while the social movement against the french labour law has been followed by very many trials leading to the imprisonment of about thirty people in France, and while the immigration policy and security climate are hardening day by day in the policies put in place by successive French and European governments, it is essential to organize solidarity to face police and judicial repression.

With the increasingly harsh, eminently political and repressive sentences that affect the poor, foreigners, muslims and struggling individuals, prisons are not about to become less crowded and we are already hearing about new ones under construction. It is up to the will of a prosecutor, a judge, a police officer’s word against one’s word to be sent behind bars for a few weeks, months or years. Through immediate trials, expeditious justice has been normalized and generalized, and some politicians, under the pretext of anti-terrorism, would like to return to special courts, while the “state of emergency” has already fully demonstrated the liberticidal nature of the exceptional judicial procedures. Dozens of people are sent to prison or assigned to their homes every day.

The deplorable conditions of confinement in prisons, the multiplication of isolation measures for reasons of radicality and sentence adjustments that force people to submit to the rules, are all factors that constitute the punishment and contribute to isolation. One of the coercive forces of repression is to rely on isolation. Whether assigned at home or behind bars, by deterrence or coercion mechanisms, social isolation breaks the mind, exhausts the body.

To fight against confinement is above all to break this isolation, to cross the walls and patiently build a tenuous bridge between the prisoners and us, to make the link between them and those around us.

Through the Anarchist Bure Cross, we want to share our daily lives, our readings, our writings with prisoners and echo the thoughts and feelings of those behind bars. We also want to fight from outside against what oppresses them inside, because the struggle in prison against prison is expensive, sometimes lengthens the sentences and because we are free of our movements and words much more than they are.

The Anarchist Bure Cross results from a desire to link the struggle to its repressive consequences, not to detach the field of struggle from the rest of the social space, not to dissociate classic detention and detention of foreigners and to consider that the anti-nuclear struggle is above all an anti-capitalist struggle and that the prisoners of the current system are those of a capitalist system, in whose service police and justice are working.

In Bure as elsewhere, we want to be the relay of solidarity to prisoners and have decided to create the Anarchist Bure Cross for this reason.